Something happened at DNS during the spring of 2017.  For quite some time these curious ideas of doing something very different from the usual or traditional kept floating in the air. There was a sense of wanting to “go radical” and to “lift up” the college.

The students decided it was time to take action, to stop complaining about things that should change and just act and try to change them – to act. The idea was to stop the programme for all teams for a defined time period, to put hands and brains together in order to improve the institution, for the students to take ownership and responsibility of their school, their own education, to have a better understanding of the programme, and to leave an impact that future students would benefit from and would want to follow up in an ongoing process.

After a long process, several common meetings and brainstorming among students and teachers, consensus was reached and it was decided to have a radical month in October, the so-called “RADICAL OCTOBER”.

Full of excitement and willingness everyone decided to act in four main areas where they thought was more needed an improvement. The four groups were: Economy, Studies, Media and Practical. Here’s a short descrition from each working group:

The Economy Group had two main goals; to reduce expenses and to increase income.
To do that, we are finding out how can we save money by checking our infrastructure and its efficiency. We are getting to understand better the function of our economy, since the better we understand and the less mistakes we make, the more we save.

Also, we created the position of External Promoters to make our promotion office more efficient. These are people who promote the DNS programme in different countries and get money for each enrolment they get done.

Lastly, we are trying to share our pedagogy with others and bring Erasmus+ into our campus, since the more we are, the cheaper it is to maintain the place and we do believe we have much to share.

During this Radical October, the Media team’s goal is to promote DNS and reach as many potential students as possible. We are especially focused on making high quality videos, since they can boost the website and our social media in a long-term perspective.

Overall, this month has been very productive in terms of the material that we have created, and we are convinced it will attract many more DNSers.

The purpose of the Practical Group was to take care of the physical body of our school: some maintenance for the buildings, reorganise the facilities we own and implement some new ones.

The first priority was to renovate the building that is usually accommodating the first year DNS’ers. We planned to spend two weeks on this project and the rest of the month working on renewing what we already have, like the Common Hall where we all gather every day, or our garden that needs some input to be functioning full speed.  We also aimed for creating and implementing new facilities like up/recycling lab to turn our trash into our treasures, clothes depot to share the surplus clothes among each other, etc.

Unfortunately, we didn’t fully evaluate how old our building is, so it took much more maintenance than we expected and in the end, we spent almost the whole month working on it. But even if we did not accomplish all our goals that we have set in the beginning of the month, this month was a huge success anyways.

It gave us so much more understanding about our school and its facilities and a lot of motivation to keep taking care of our place and spread this message among all DNS’ers. Also, it encouraged us to have much more ownership of the practical actions here in the school and in general, to get to know the tools and where to find them, how to implement one or another action.

All the actions of the Radical October inspired the minds and empowered the hands of the practical group. And I think these are the achievements greater than any.

We are the insurrectional radical Study Group army. When we started Radical October, and decided that we will improve the studies and learning in general, we had no idea what it would mean in practice. We started from this premise and tried to put some structures and colours in it. It took quite a while since it seemed like we had the need to go through a whole process of discussing different areas of our studies, on educating each other on the curriculum and the way it is organised.

Quite early on, we defined some frames to explore in order to discover if they could lead to anywhere. Courses – how to have more and better courses? Study tasks – creating some new ones and upgrading the old ones. Creating an orderly, welcoming and functional study package to facilitate students’ navigation in the DMM field (meaning our curriculum in Tvind language).

Lastly, producing a booklet of tips and tricks about studies.

Not surprisingly, more ideas appeared on the table along the way . For all practical ideas that we had, it took us some hours of talking and spacing out to get close enough to grab them. A challenge in the beginning was to accept the state that we can’t clearly see where we are heading, and trust the process and do our utmost.

Now as we come nearer to the closing of the month, we have clearly defined tasks and we dive in production. There are four days left and we have no idea how we will manage to finish up with all the tasks. We are going for it without paved path and trusting the process where we will crash at the end with all the newly created tools laying around.

With “Radical October” done, the students came back to normality, but what occurred in this month will be settled in their minds: More aware that the school belongs to them and that their decisions play a fundamental role in their education. Determined to implement the insights gained in this special period in the remainder programme. And not least: Understanding of how this “Radical October” is an example of how to solve issues in our society. To implement small scale solutions is the way to solve bigger issues. 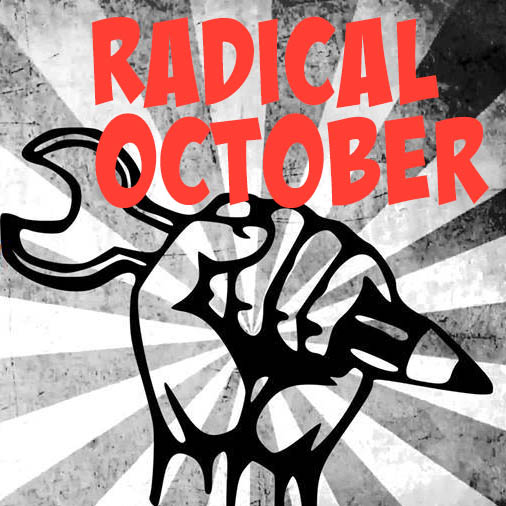 After a long process, several common meetings and brainstorming among students and teachers, consensus was reached and it was decided to have a radical month in October, the so-called “RADICAL OCTOBER”.

Full of excitement and willingness everyone decided to act in four main areas where they thought was more needed an improvement.

Learning crucial teaching skillsFor the past 10 months of Teaching Practice as a part of my education at DNS Tvind, I have had the pleasure of working as a teacher-assistant with learning-apprehensive students at Friskolen Helios. The time spend at the school will...

Humana People to People remains committed to shouldering the task of training teachers of another kind who are ready to teach, inspire and lead the new generations for many years to come.